I have just discovered a site known as The Printed Blog, which I refuse to link to out of principle. (I think it's principle. It might be out of principal - I can never remember which of those is which.) If you want the link, send me a SASE (that's a self-addressed, stamped envelope, to any Nickelodeon fans from the mid-80s who happen to be in the audience today!), and I'll send you the link by US Mail, which is like the Pony Express with a massive carbon footprint and stamps that no longer need licking.

Sorry, getting back to my point. The Printed Blog (not pictured) (or "hyperlinked").

I thought one of the nice features of blogs was the drastic reduction of our US Mail-sized carbon footprint, wasn't it? I mean, wasn't the whole point of "zines" and "weblogs" and the "intranet" to conserve paper? Wasn't that at least part of it?

And now comes a service willing to print out the good parts of the internet and deliver it to you. This is not progress. This is not change blah blah blah-ieve in. This is what was missing from Alanis Morisette's song "Isn't It Ironic:" this is IRONY.

Per our agreement, enclosed above please find your one (1) corny joke. Your payment is due in ten (10) business days. Please don't tell Kermit about this. Or Jesus.

Your pal in Jesus,
Smokey.

Posted by Smokey Robinson (aka Matt) at 12:14 AM No comments:

Email ThisBlogThis!Share to TwitterShare to FacebookShare to Pinterest
Labels: Alanis Morisette, letters to people other than Jesus, social work

I woke up this morning with a smile on my face and a clear breath of air in my lungs, because I knew that I had gone to sleep last night with President Barack Obama protecting me. Of course, Mister Prez (or The Old Shoe Magnet, as I like to call him) was probably heading to his fifth or sixth party when I went to sleep, but that's beside the point. Things were just better this morning. Even the green crusty thing in the corner of my eye was somehow less crusty and a more pleasing shade of green. Also, it was singing show tunes.

Pardon me, The Old Shoe Magnet. Sorry to interrupt your dance party, but I believe we were promised change?

That's not change we can believe in.

What happened to all that?

I'm sick of this President Obama dude already. It's like 10:07 in the morning now, and he's basically done nothing at all since he got sworn in. Where's my health care, dammit? Where's my dog that shits Skittles? Where's my 3 AM phone call, which I probably would have gotten if Hillary Clinton were The Old Shoe Magnet.

This is the worst day. You said you would be different, Obama but you're just like every other President because the dogs still poop dog poop and the pizza place isn't even open yet, much less giving out free pizza. So all I'm saying, as we get ready to watch your approval ratings drop to the mid-20s by later today, is watch out for flying shoes, you big jerk.
Posted by Smokey Robinson (aka Matt) at 10:08 AM 1 comment:

Sometimes, the answer to a riddle is staring you right in the face, and so you write a blog piece explaining it, only to discover that there is an even more staring-you-right-in-the-face answer to the same riddle lurking in the shadows. Why is it lurking there, you wonder? But you ignore that question and instead write another blog piece about the second answer, only to discover that you have once again been taken in like Steve Jobs's wardrobe, and that a third answer is now in the mix that beats the piss out of both the first answer, which was staring you in the face, and the second answer, which was also staring you in the face but also lurking in the shadows for some weird reason that it will probably never bother to tell you about.

Thankfully, this has never happened to me.

And yet more thankfully than that, I have once again solved the case of the crashing US Airways plane, saving the NTSB the trouble of doing its job, and saving the taxpayers of the United States a sum equivalent to roughly 15,000 Vietnamese Dong, or 98 cents.

The whole crash was an elaborately staged metaphor, paid for by the NFL, to augur the result of this weekend's AFC Championship game between the Baltimore Ravens and the Pittsburgh Steelers. Bird beats man! Ravens win!

Of course, it's entirely possible that I'm wrong, but if I were the Steelers, I wouldn't be too comfortable, even if they did manage to somehow squeak past the Ravens. Because you know who'll be waiting in the Super Bowl? The winner of the NFC Championship game between the Philadelphia EAGLES and the Arizona CARDINALS.

Anyone who waited until after reading this post to call their bookie, YOU'RE WELCOME.
Posted by Smokey Robinson (aka Matt) at 4:44 PM 1 comment:

Email ThisBlogThis!Share to TwitterShare to FacebookShare to Pinterest
Labels: transit mysteries solved by me with uncomfortable and suspect redundancy

Unemployment Scam Alert - A Public Service Message from the blog

So apparently, this inauguration thing is a pretty big deal. Word on the "street" is that there's going to be speeches and a big parade, network coverage, and a whole slew of people freezing their keesters off, all to celebrate the fact that an old white dude from Texas is joining the swelling ranks of the unemployed.

Speaking of which, Texas's unemployment was sitting at 5.7 percent as of November '08. Add in George W. and whoever else lost their jobs in Texas in the past couple months, and it could easily top 6 percent when the next report comes out January 27th.

Why is this relevant?

Maybe it's all that sleuth-work I did yesterday twice solving the mystery of the crash of US Airways 1549, or maybe it's the fact that I've been wracking my brain trying to track down the Pee Bandit in the Canning Operations Division of Dole Fruit who keeps leaving the urinals full, or maybe it's the fact that I constantly smell conspiracies at work around me, but I smell a conspiracy at work around me.

So to all of my readers in the Dallas area, if you would please be so kind as to keep your eyes on the local unemployment offices to see if and when Mr. W. Bush shows up to file. He has to give a goodbye speech at Andrews Air Force Base Tuesday afternoon, and it's like a three-hour flight from DC to Texas, so I'm guessing he'll be the first guy in line Wednesday morning. I got a shiny nickel for the first person who sends in a photo.
Posted by Smokey Robinson (aka Matt) at 12:26 PM 2 comments:

If my geese theory isn't entirely satisfying, I have two things to say to you:

1. What kind of an idiot are you to not accept the reality that is so obviously staring you in the face? Geese did it! It's as plain as the plane in the water!

2. You are absolutely right.

Not to worry, though, because once again, without even stepping out of my subterranean working quarters, I have managed to assemble the pieces of a theory based on the evidence that is staring us all in the face.

Did anyone else happen to notice that WABC, the New York affiliate of ABC, was the first network to cover the story? And did any of those people who noticed that also happen to glance ahead in the television listings to next Wednesday, when a CERTAIN ABC DRAMA about a PLANE CRASH is having its SEASON PREMIERE?

I has solved it again! I am genuis!
Posted by Smokey Robinson (aka Matt) at 4:49 PM 1 comment:

Email ThisBlogThis!Share to TwitterShare to FacebookShare to Pinterest
Labels: transit mysteries solved by me a second time

Everyone at the Fruit Plant is abuzz with speculation about this plane that just crashed into the Hudson. It seems there's a healthy amount of skepticism about the whole "flock of geese" alibi, and understandably so. I mean, when you boil it down, I know geese are basically bloated bags of green shit with feathers and wings and brain power equivalent to that of a piece of moldy fruit, but even moldy fruit has the sense to get out of the way of an airplane. Have you ever heard of a piece of moldy fruit getting hit by a plane?

I rest my case.

Still, the whole incident does raise a lot of questions. For instance, what the hell are migratory birds doing in New York City in January? Is this part of some new, super-lazy but highly technologically savvy generation of geese that heard all about global warming and thought they'd be off the hook about the whole "flying south" thing, but then they caught a look at the forecast on the weather.com app on their iPhones and decided maybe they should head south before this weekend, and being that they were both lazy and equipped with iPhones, they decided to hitch a ride on the next flight heading to Greensboro?

Makes perfect sense. I have solved the mystery, as I always do. YOU'RE WELCOME, US AIRWAYS AND THE FAA. My bill will be in the mail.
Posted by Smokey Robinson (aka Matt) at 4:27 PM No comments:

Email ThisBlogThis!Share to TwitterShare to FacebookShare to Pinterest
Labels: transit mysteries solved by me

The Consequences of Seeking Flame-Broiled Perfection

Feast your eyes on this: 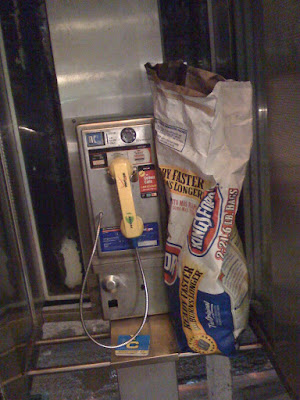 Yes, it's a bag of Kingsford charcoal, sitting in phone booth on the corner of 46th Street and 5th Avenue in New York City. If you guessed it, you are a winner. Contact the prize hotline to find out what you've won.

But if you're like me, it isn't good enough just to know that there was a bag of Kingsford charcoal sitting in a phone booth on the corner of 46th Street and 5th Avenue in New York City. There needs to be a punchline too. Well, I tried, everybuzzy. I racked my brain the entire way home, and for the three subsequent hours, and I have come up with zip. Zilch. Nada. Fuck all.

I did, however, remember that there was an empty bag of charcoal sitting in a garbage can in Grand Central Station one morning last week as I made my way up from the 7 train toward the Dole plant (not pictured). Which leads me to two possible conclusions, neither of which I find very satisfying: (1) someone is grilling in midtown and not offering me any, or (2) Alex Rodriguez is trying to send me some sort of weird, non-literal, possibly vaguely threatening message.

Look, Old Bay-Rod, for the last time, I'M SORRY I DROPPED YOU AS MY FRIEND ON FACEBOOK, BUT I REALLY WANTED THAT WHOPPER. Besides, you never SuperPoke me back anymore, and you refuse to play me at WordTwist because you're too busy running around with Madonna and eating fish with Kate Hudson to spend time with your real friends anymore. You've changed, Haunted Hay-Rod. You've changed. And not the good kind of change either, where you start sending notes and chocolates at unexpected times. Leaving crumpled bags of Kingsford charcoal where I'll just happen to see them... [SMOKEY shakes his head reproachfully]... not cool, man. Not cool at all.
Posted by Smokey Robinson (aka Matt) at 10:46 PM 1 comment:

Email ThisBlogThis!Share to TwitterShare to FacebookShare to Pinterest
Labels: beisbol, how to get a Whopper
Newer Posts Older Posts Home
Subscribe to: Posts (Atom)