I will never understand how, in an era where the sidewalks of cities across the world are littered with bloggerizers armed with 32GB iPhone 3G S's that have cameras and internet connections and apps for that, how a grown man could let himself walk out of the house with the bottom half of his body clad in this... 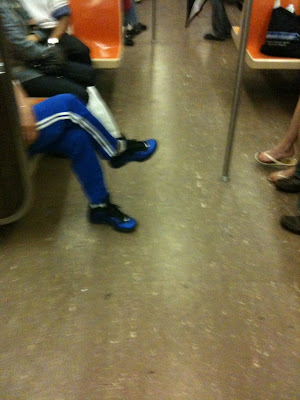 ...and not expect to be made famous (or infamous, perhaps?? Like a pirate? Yar? Who's with me?) by this blog, which you are the only person not reading.

Oh, and as for the blurriness, ha ha, yeah, thanks for pointing that out! See, what happened was that I was laughing, and also I took this picture on a moving train, and also, fuck you for noticing, you jerk. I suppose you're too cool to spend entire subway rides covertly snapping pictures of random strangers and their fashion faux pas, right? Why don't you go stick your head in a bucket of something gross and/or toxic. Who do you think you are, Alvin Praxley or something? You make me sick.

'Kay, bye! Thanks for reading!

*Okay, that's not true. Technically. Pretzly is good, but nobody beats Michael Bublé when it comes to songs about shoes and funky fresh beats.
Posted by Smokey Robinson (aka Matt) at 11:13 AM 7 comments:

Email ThisBlogThis!Share to TwitterShare to FacebookShare to Pinterest
Labels: ooh so fashion

A Brief, But Still Panoramic History of the Dole Fruit Plant, Part I

The Dole Fruit Plant is not associated with the Dole Food Company, Dole Food Company, Inc. or Castle & Cooke, Inc, currently headquartered in Westlake, California. Neither is the Dole Fruit Plant affiliated with the Hawaiian Pineapple Company, the historical forebear of Dole Fruit. This much needs must be made clear right at the start of things; despite appearances which were designed to fool the public into believing the contrary, the fine people at the Dole Food Company have done absolutely nothing to deserve having their names and reputations besmirched by any association with the scandalous and unsavory history of the Dole Fruit Plant in New York City. At various times though the years, Dole Food Company has attempted to sue the Dole Fruit Plant for trademark infringement and various other things (i.e. a 1978 nuisance suit over a particular Dole Fruit Plant employee’s bad breath), but the Fruit Plant has two distinct advantages in this regard: first, its internal legal staff has had surgical alterations to their brains to allow them to be extra-vicious and need less sleep than ordinary human beings; and second, said legal staff enjoys a close relationship with the governments of the United States, Canada, the Philippines, Vatican City, the Principality of Monaco, France, and an endive salad made in 1982 that rules most of northern Africa and the Middle East.

In short, they are not to be trifled with.

America was full of opportunity for scores of tens of dozens of hundreds of millions of thousands of pounds of immigrants in those days – and not just for extreme political fear-mongering, either. The American economy was festooned with plum, high-paying jobs in fields as diverse and satisfying as 18-hours-a-day-sewing and rock-breaking-from-sunrise-to-sunset. Some immigrant laborers earned entire, luxurious pennies every day.

Dr. Dmitri, however, did not need to seek his fortune. His family was already wealthy. His journey to America and his quest to capitalize on the “scare” phenomenon were predicated largely on boredom, the sort of deep malaise that had led so many other great men (such as Einstein and Hemingway) to lives of decadence and sloth and murder. So Dr. Dmitri spent some of his considerable family fortune purchasing a zeppelin, which he flew to America and then detonated for no better reason than it was simpler than paying for hangar space. Also, because it really impressed a girl he had picked up in Paris whose name he failed to learn before she perished in the zeppelin’s fiery explosion.

Dr. Dmitri was not a man who sensibly dispensed his considerable sums of money. It was well known in Tyrol that Josef Dmitri could get a bit slack in his guard on the old purse strings, particularly if you fed him enough feta cheese. Also, he had terrible luck with women. his combustible companion from Paris was neither the first nor last woman who would explode at his hands.

Dr. Dmitri quickly discovered that there was no money to be made from scares in the private sector. Government funding seemed to be the way to go. And in order to secure said funding, Dr. Dmitri quite sensibly approached the venture under the guise of research. “Far easier,” he wrote “to convince the American government to study the ill effects of a major social movement than to simply vilify and eradicate them, though extermination is obviously still the objective here. Muhuhahahaha.”

How Dr. Dmitri settled on existentialists as his choice of scare targets is, at this point, a mystery lost for the ages, a mere pebble dropped into a vast ocean of time and meatball parmesan sandwiches from one of the finer Italian restaurants on the eastern side of midtown Manhattan. Why someone would need to drop a pebble into such a ridiculous and confusing metaphorical ocean is beyond the power of scholars to understand because scholars are really nowhere near as smart as they’re always rumored to be. Also, it’s irrelevant, because the metaphor is really weak. An ocean of time and (really, really good) sandwiches? Even really good sandwiches have limits to their usefulness at some level, and this is that level.

The point is that Dr. Dmitri chose, as his scare victims, existentialists. That jerk.

The One Millionth Word Ever in the English Language Ever, of All Time...

[this was the placeholder for the One Millionth Word Ever in the English Language Ever, of All Time, which was not, as it turns out, "noob." But it totally could have been "blorkenheim" if enough people would just have believed in themselves.]

I don't want or need to get all preachy on y'all, but you know, the One Millionth Whatever totally could have been "blorkenheim" if enough people would just have believed in themselves. You would have manned up if I were Colbert, and you goshdarn well know it.

Anyway, congratulations. To ME!

Email ThisBlogThis!Share to TwitterShare to FacebookShare to Pinterest
Labels: i just leapfrogged you and became the most famous person for this, immortality, the cult of me

Meet the new Jesus (this time with really awesome boobs)

Move over, Oprah Whimfree. Now there's something leaner, whiter, and more descended-from-the-loins-of-Jon Voight on top of the Hollywood Reporter's list of the 100 most powerful celebrities in celebrity-dom. That's right, it's Angelina Jolie. Yes, that Angelina. Yes, that Jolie. The coup has been staged, and thanks to the laser-guided incendiary missiles (not pictured) she had installed in her massive lips (yes pictured), Jolie is now more powerful than you, Oprah! 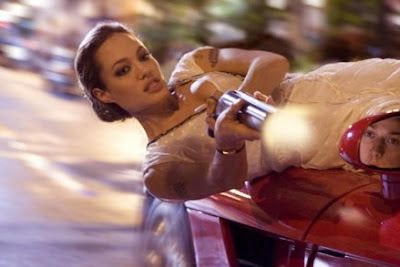 It's true, too. How else do you explain the fact that she's even on the list after the release of that piece of trash Wanted? (Which, for those of you keeping score at home, also starred the dude who played the half-goat in Narnia, the Witch, and the Kids in the Armoire - what was his name? Right, Morgan Freeman.) I'm no film expert, but I would think attaching yourself to that kind of box office poison would be enough to strangle the life out of most people's movie careers. But what does Jolie do? She maneuvers it into sequel talks. And her character died at the end! Spoiler alert!

In and of itself, that's not really enought to make Jolie more powerful that Oprah, with the book club, and the ability to induce poultry-related riots on a whim, and her daily strangle-hold over the consciousness of millions of suburban women that make up the backbone of this recession. You have to add in the lip missiles (not pictured). Then it's power. A sword would be cool too; just something to think about.

So no more letters to Jesus, because that dude's act is getting way old at this point. (Seriously, Son of Man, get some Band-Aids and put on some Your-Dad-damnned Nikes and a pair of jeans already.) And no more letters to Oprah either, because you're not number one anymore, Oprah, and also because the touchy Chicago courts are really, really narrow-minded when it comes to the definitions of "harassment" and "violating a restraining order." From now on, it's Jolie for me.

Smite them. Smite them all. Unleash teh fury.

A sword would be cool too; just something to think about.

Yours in number-one-ness,
Smokey F. Robinson

P.S. Can you make it so we don't have to wait till January for the next episode of Lost? I NEED TO GO BACK TO THE ISLAND.

Posted by Smokey Robinson (aka Matt) at 11:22 AM No comments:

Email ThisBlogThis!Share to TwitterShare to FacebookShare to Pinterest
Labels: apples which I like, bananas, letters to Jolie
Newer Posts Older Posts Home
Subscribe to: Posts (Atom)