What We Know About the Future

It is a well documented fact that Jesus's first act after graduating from Hogwarts, changing his name to Santa Claus, and moving to North Pole, Alaska was to start the original Frozen Olympics right here in the good old U. S. of A. Here we are 4,000 years later, and the FroLympics have moved to the icy wasteland of Vancouver, Canada, all because of stupid Al Gore, who just had to come along and invent global warming, didn't he? Why couldn't that jerk have been born in Antarctica? That place is freezing! (At least, until he gets his grubby, climate-changey hands on it...)

But as upsetting as that is, that's all in the past now. And the FroLympics, in spite of the fact that NBC's coverage is pretty heavily grounded in the present (and that the coverage itself is tape-delayed), are all about the future. News flash, everybuzzy: the future is very gay, and very Canadian. 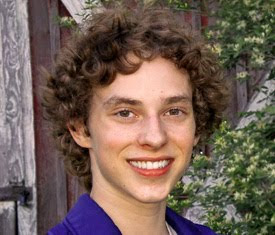 I don't think Laser Batman is even a third as gay as Johnny Weird (or whatever his name is) either, which is pretty shocking considering just how gay Laser Batman is. How gay is he? Let's put it this way: Laser Batman is gayer than Adam Lambert and Albus Dumbledore and boys who read Twilight combined! But Johnny Weird has a show on the Sundance Channel, meaning that Laser Batman's only real chance to out-gay him is to land a multi-season deal with Bravo.

Something to shoot for if you ever want your parents to love you again, Laser Batman.

The future is far less bleak in Canada, however, not just because they have the FroLympics and no global warming, but because of Marianne St-Gelais, who actually managed to win a silver medal in women's 500-meter short track speed skating yesterday, on her 20th birthday - a performance that far outdistances Laser Batman in terms of competitive success, but falls miles short in homo-sin-uality. Here's a picture of Marianne St-Gelais at a competition last October, and you can tell just by looking how gay she ISN'T: 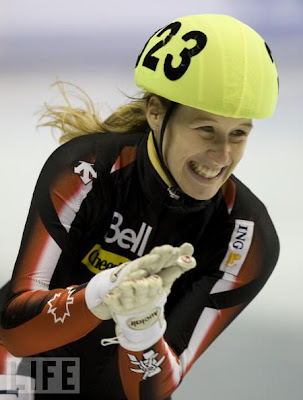 My guess is that Laser Batman watched her victory at home yesterday, consoling himself with a pastel-colored cocktail while taking refuge in the arms of some big, burly-chested lumberjack who thinks he's actually a girl. There could the makings of Laser Batman's Bravo show based on that relationship, but for the life of me, I would NEVER EVER WATCH THAT EVER.

If you're concerned about the lack of silver and gold in America's future, however, there is a lawmaker in South Carolina who might have you covered. 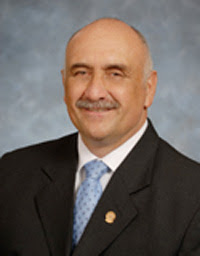 Meet Mike Pitts, a retired police officer turned State Representative with an idea so crazy that it just might work. Pitts is ready to turn back the clock on financial sanity with a bill that would outlaw money - or, as Pitts refers to it, "paper with ink on it." Pitts uses words like "collapse" (the verb, not the noun) and "collapsing" and "collapse" (the noun this time) to describe the potential dangers to the U.S. economy if we keep trying to use money to pay for goods and services. His wise and researched alternative: load up your pockets with precious metals, like gold and silver - commodities whose fluctuating values could leave you feeling like you just won (or lost) the lottery every day!

I think Pitts is onto something here. Because we may never be able to bring snow or winter or the FroLympics back to America, but if Pitts has his way, at least we'll have gold and silver (assuming we don't get robbed by people who aren't weighted down by pockets full of gold and silver, that is). And I know from my long correspondence with Him that that is exactly what Jesus Claus would have wanted - that, and for Laser Batman to get that show on Bravo.
Posted by Smokey Robinson (aka Matt) at 4:13 PM