The Search for a Missing Boner

I think we can all agree that when a man who delighted millions with his science fiction portrayal of a Cold War-era Russian stereotype living on a spaceship commanded by a dude from Iowa begets another man who delights millions with his portrayal of a Spiccoli-esque D+ high school student on Long Island in a seminal '80s sitcom, and the second man goes missing in Vancouver on Valentine's Day, then we as a culture have really let ourselves down.

Thankfully, that has never happened.

No, I'm just kidding, it totally has. Where have you disappeared to, Andrew Koenig? Alyssa Milano is sick with worry. As are a surprising amount of people on the facebag.

Frankly, I say all those people are hypocrites. Why is it only when Dustin Diamond is getting airbrushed out of "Saved By the Bell" cast photos, or when the miniature black kid who played Willis's younger brother on "Diff'rent Strokes" is getting arrested in Utah, or when the dude who played Boner on "Growing Pains" goes missing in Vancouver that we, as a society, wake up and take notice? Maybe if any of us (meaning all of you who are the only ones not reading this blog) had bothered to check in with Boner Koenig before he disappeared, then none of this would have happened. We (again, I mean you) have nobody but (y)ourselves to blame.

But here's what I really don't understand: he went missing in Vancouver during the Olympics? How this is possible, Kiptin? Vancouver is covered all over in cameras! (Side note: how much better would that sentence have been if it was "Vancouver is covered all over in clover?") Anybody thought of checking all that HD footage of everything except hockey to see if Boenig is visible in the crowd? 'Cause tell me a guy with this hairstyle wouldn't stand out, even in a crowd of weirdo figure skating fans: 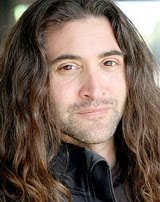 You picked the wrong part of the world to go missing in, Boenig. We're gonna find you, and then as soon as we know you're okay, we're gonna go right back to forgetting about you, just like we forgot about Boner after he left "Growing Pains" for the army. I guess we'll be seeing you in Sochi in 2014...
Posted by Smokey Robinson (aka Matt) at 12:20 PM