It saddens me to no end to report that in yesterday's New York City mayoral election, it was Mike Bloomberg, and not the Muppets, who took Manhattan. 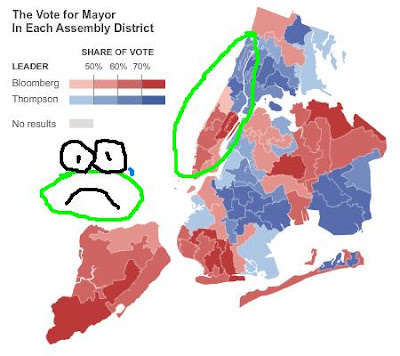 In fact, the Muppets didn't even come in second. That honor went to someone called "City Comptroller Bill Thompson," whose haircut led me to believe he was at least half-Muppet himself.

(Hey, psst! Am I the only one who thinks "Bill Thompson" sounds like a made up name? How generic can you get? Bill Thompson? It might as well have been Jack Smith or Bob Mitchell or Bill Thompson or something. Bill Thompson is like the kind of name you used to check into a hotel when you don't want the federales or that nosey wife of yours to find out where you're staying. What are you hiding, Bill Thompson, if that fake-sounding name IS your real name?)

Anyway, Bill Thompson lost, and now he has to go back to the same job he had before, and probably have lunch at the same stupid cafe downstairs in the lobby of the same dumb, boring building, which is almost as frowny face as the Muppets NOT taking Manhattan, as I was led to believe they would.

The New York times says Mayor Bloomberg no longer seems invincible, and I agree that he does look pretty vincible, which is what makes the Muppets' failure to take Manhattan all the more heartbreaking. This is like reliving the failed Oscar the Grouch '08 campaign all over again. Only this time, with 30-35 percent more tears.
Posted by Smokey Robinson (aka Matt) at 11:08 AM

Email ThisBlogThis!Share to TwitterShare to FacebookShare to Pinterest
Labels: failing, failure, not succeeding, paid for by the Committee to Re-Invade Vietnam, poop jokes, tastes like Muppet