These two news items remind me of this great stegosaurus place I used to know on 9th Avenue, back in the Mesozoic era. Damn, I haven't been there in ages. Boy, could I go for a nice, medium rare stego-steak right about now... 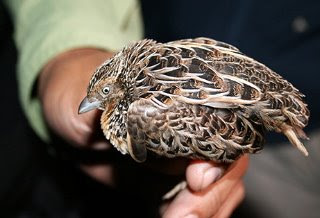 A rare Worcester’s buttonquail (Turnix worcesteri), a probable female, which is also locally known as the Philippines quail, is shown being photographed while being held by a bird hunter in Caraballo (above).

The bird, thought to be extinct, was photographed for the first time in the Philippines, and then sold to a poultry market as food. 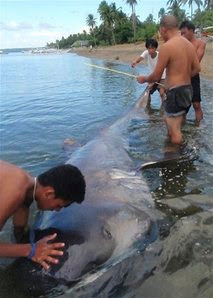 Fishermen in the Philippines accidentally caught and later ate a megamouth shark, one of the rarest fishes in the world with only 40 others recorded to have been encountered, the World Wildlife Fund said Tuesday. The 1,100-pound, 13-foot megamouth died while struggling in the fishermen's net on March 30 off Burias island in the central Philippines. It was taken to nearby Donsol in Sorsogon province, where it was butchered and eaten, said Gregg Yan, spokesman for WWF-Philippines.

from Yahoo!, also via boingboing

Now, I realize I might have Easter on the brain (you should too, Christians...), but isn't this a little bit like if the apostles had tried to take a bite out of Jesus when he reappeared? It's like, "oh, hey, Son of Man, we totally thought You were extinct! We're so glad You're back! And have You been working out, because That Flank of Yours is looking pretty tasty... no, wait, come back!!"

They don't call him the Lamb of God for nothing, folks. Am I right? Who's with me?

What's with all that gathering lightning? 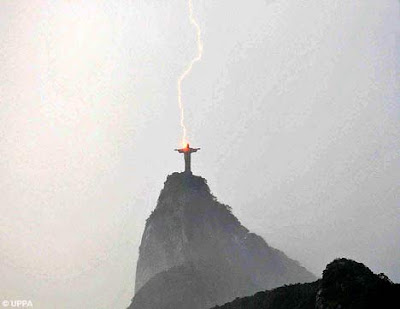 Marshmallows and lollipops,
The Smoke Monster.