Dude, the Day After Easter is Painful Enough As It Is

I don't know about anybuzzy else, but the day after Easter is not a happy day for me AT ALL. First of all, there's the realization that good ol' Jesus C. (Friend of the blog) has gone back to His spaceship with Elvis Presley and the Tooth Fairy until His birthday party in December, or at least until one of those fake "Christmas in July" promotions where retail stores give huge discounts on vacuum cleaners and Michael Bolton CDs (Jesus's two favorite gifts!).

And second of all, I'm always a little bit sluggish the day after Easter because of the massive amount of labor involved in obtaining my favorite Easter delicacy, chocolate-covered rabbits (not pictured). Because as any connosieur of chocolate-covered rabbits knows, it is really hard to catch a rabbit. And it is even harder to convince the rabbit to sit still while you dip it in a pot of molten chocolate. There may be more than one way to skin a cat, but that's cats, and that's skinning, and we're talking catching rabbits and dipping them in molten chocolate, which is quite the holiday undertaking, let me tell you.

I remember the days when Cadbury Creme Eggs used to be enough for me. But then I discovered that not only are they not real eggs, they're not laid by a real bunny either. Fakers! And I am all about the authenticity, folks, as you probably already know from a cursory critical examination of the lyrics to my hit song, "Tears of a Clown."

I always try and make a few extra chocolate-covered rabbits, sometimes to give out as gifts, and sometimes just for me. But these are lean times. The Great Repression is in full effect. So this year, I not only had to compete with the speed and caginess of my leporine prey, but also with the dozens of hungry Wall Street bankers who prowl the streets of New York nowadays in search of pigeons, rodents, and small game animals for sustenance. I'm not a competitive person by nature. I just want to collect my coneys and be left in peace, not harrassed and held at Blackberry-point by some down-and-out Lehman Brothers layoff-ee who rifles through my pockets and then laughs at me for carrying around Goonies trading cards. They're just there to give me luck with the hunting, you jerk.

God damn, was that woman mean.

And of course, that's all not to mention the disappointment that comes when you bite into the head of a chocolate-covered bunny and discover that the rabbit you worked so hard to catch and dip has somehow managed to disappear from its chocolate tomb, leaving you with nothing but a hollow, hare-shaped piece of chocolate. I know it's very thematic and Easter-appropriate and all, and I strongly suspect that Jesus somehow magicks them out of there as a prank on me (very funny, Jesus), but honest to Christ: if I wanted hollow chocolate, I'd buy it from a fucking store.

My point is that the post-Easter Monday is already fraught with enough exhaustion and heartache. So the last thing I needed to see when I looked at my Internet first thing this morning was this: 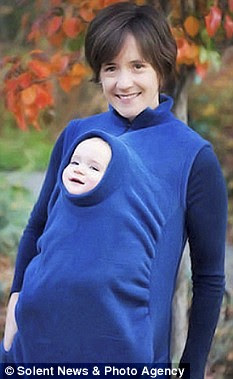 The Peekaru? Seriously? W.T. Fuck, America? Who's responsible for this? I want names. When Jesus comes back next year*, I'm totally ratting you guys out.

*That's assuming Barack Obama doesn't blow up the world before then, which is a pretty generous assumption considering how he's doing so far.
Posted by Smokey Robinson (aka Matt) at 2:39 PM

Email ThisBlogThis!Share to TwitterShare to FacebookShare to Pinterest
Labels: angst, bananas, consider yourself lucky that this didn't turn into a letter to Jesus, more angst

The Peek-aru??? I would never subject a child to such a torturous device.

That kid looks like Kuato (Cuato?) from Total Recall, the alien that grew out of Ahhnold's innards.

This looks and sounds suspiciously Japanese...