If Oscar is elected president, he promises to take pretzels off the enemy combatant list, where they have been ever since January 14, 2002, when a brave pretzel (coincidentally named Dennis Kucinich) tried to, um, "serve articles of impeachment" on the President, as an actor said to a bishop.

You have to be very careful with your wording when mentioning what Dennis Kucinich, the Pretzel was really trying to do.

Note to the government: these are all jokes. I just wanted to spell that out, because I know how easy it would be to, um, "be misread and sent to Guantanamo," as an actor said to a bishop. 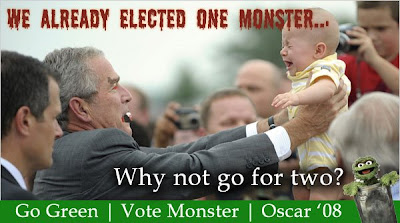 Posted by Smokey Robinson (aka Matt) at 7:11 PM