A Sandwich Board of the Times

The man's clothes are a vision of decrepitude and dereliction, the uniform of a veteran of the war for survival on the cruel streets. It's a war that no one is winning, since the sides and the battle lines haven't ever been made clear. Nor, for that matter, have the opposing forces who are supposed to be squaring off. Is anyone fighting against survival on the cruel streets? Because if so, I'd like to meet them. Please contact the blog.

For now, though, let's get back to the story of the old man with the sour look and the as-yet-unrevealed object in his pocket, which I will tell you right now is a Blackberry.

The cashier raises an eyebrow at the approaching "customer." He looks bored and unimpressed. Between the sob stories and the outright frauds, this man has had more of his time wasted than all of the time wasted on the internet by all of Generation X put together. He barely looks up from his e-paper, although this is in part because the opacity setting on the e-paper is low enough that he can see through it, since the pawn shop is roughly as likely to look after itself as the Old Granddad is to drink itself. If these analogies and metaphors aren't clear enough for you, please contact the blog.

"I wanna sell this," says the old sourpuss. And he whips out a Blackberry Curve, which once retailed for the unthinkable sum of $349.99 without a contract from AT&T Wireless.

Sorry, that sentence was wrong. It should say, "And he whips out a FUCKING Blackberry Curve, which once retailed for the unthinkable sum of $349.99 without a contract from AT&T Wireless." I changed it at the last second because I was worried that people might freak out about the profanity if I didn't mention it first and give them a chance to look away. Spoiler alert.

The cashier says, "fuck off," and then adds something in Spanish to the effect that he wishes he had a boot long enough to kick that gavron in the mantequillas while the old man hustles to grab his prize and shuffles backward to the door, the look on his face grown even sourer. This is the fourth FUCKING pawn shop that turned him down! (Spoiler alert: more swearing.)

He emerges onto the cruel streets and with his arms outstretched, casts a hideous curse at the heavens above. Just a few short years ago, the Blackberry was a status symbol, a veritable declaration that the person carrying it was too much of a self-important asshole to leave his email behind for like an hour and a half while we grab dinner with his friends. It used to be like, diamond shoes? Check. Pockets stuffed with $50 and $60 bills? Check. Blackberry Curve? Check. But now, this bedraggled, poopyheaded old man can't even scrape together enough cash from the resale value to buy a bottle of cheap, disgusting booze.

"Why?" the old man yells, anguished, at the God who has forsaken him every bit as much as He forsook Jesus Christ, His only Son, our Lord and Savior, that day on the Cross a couple thousand years or so ago. The old man's inadvertent sobs divide his subsequent bellowing calls into syllables: "Why-hy-hy-hy? Wah-hah-hah-hah-ha-ha-haaaaaaaeeeeee?" And as he rears back and hurls the worthless hunk of really sophisticated electronic equipment downward at the oddly anachronistic cobblestones of the road, the old man gets struck by lightning and dies, because I couldn't think of a reasonable way to end this paragraph without killing him.

People, the story you've just read is true. Except that it hasn't happened yet. But it will. Oh yes, it will. These economic crisis times are worse than I ever conceived, even in the wild safari that is my imagination. Because while it's true that homeless men aren't actually selling Blackberries for crack or alcohol or ice skating money (yet), you can tell we're headed in that direction. I discovered the proof from a sandwich board I saw outside of Whole Foods earlier this evening. 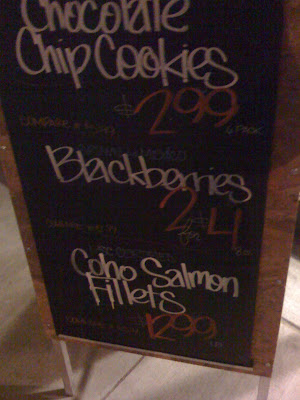 That's right. BLACKBERRIES ARE 2 FOR $4 AT WHOLE FOODS. I double-checked with three store clerks, a manager, eighteen other customers, the cops who dragged me out of the store, and the old homeless man with the sour face who was lying on the sidewalk about four feet from where this picture was taken.

You can't see him because I had to stand astride him in order to get a good angle on the sign. But his face was really sour, let me tell you. I wish I had a Blackberry to donate to him, but I don't really carry loose change in my pocket anymore, because I'm a grown-up now.

Oh, and FYI: this picture was taken by my pal Knickers, who is a FUCKING iPhone.

[SPOILER ALERT: There is plentiful swearing contained in this post.]
Posted by Smokey Robinson (aka Matt) at 12:30 AM

You are wonderfully warped.

If you think I'm warped, you should see my record collection!

(I was trying to figure out a space-time continuum joke, but I couldn't get the bat off my shoulder.)

Thanks, Ms. Arbor. Feel free to browse the archives.