It's Not Easy Being Green

Hey, everybuzzy. Hi. How are you doing. I hope you're okay.

It's time to face the facts: this election is pretty much done for the Grouch-Piggy ticket. Maybe it was over before it started, like one of the aborted fetuses that Barack Obama loves so damn much and probably eats for breakfast before he prays to Mecca and calls up Bill Ayers and Osama bin Laden on the phone to talk about which buildings he's planning on blowing up first after he gets inaugurated.

In the end, we never had any hope of competing with Obama's far superior marketing machine. I mean, when you've got advertising like this: 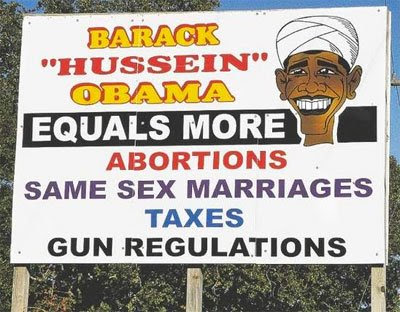 What hope is there for anyone else? How can you look at these things and NOT want to vote for Barack Obama? I want some Obama Bucks! I want more abortions and same sex marriages! Sign me the hell up!

But the Oscar campaign was beset by further struggles too. Remember back when Hillary Rodman Clinton dropped out of the race, when the candidate field had been whittled all the way down to two with just a few months left before the election? This Race to the White House™ started with eighteen people and got all the way down to TWO! How much longer could it possibly be before the pool narrowed even further, to just ONE, and then ZERO! That was the centerpiece of my electoral strategy, if you recall.

There were a few problems I didn't foresee. First of all, these McCain and Obama chaps turned out to be much more persistent about becoming president than I thought. I just assumed that since every other Democrat and Republican changed their minds and decided not to run, so would John McCain and Barack Obama. I assumed wrong.

Worse than that, it seems I wasn't the only person who backed a surprise candidate with the hope of gaining some late momentum. Check out some of the competition: 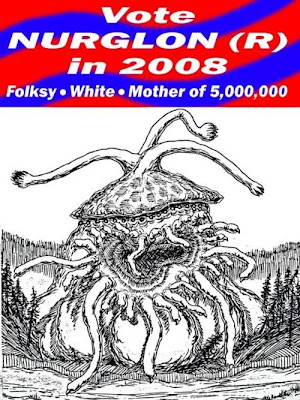 Seriously, how the fuck is Oscar supposed to compete with Caligula? Talk about executive experience - dude was in charge of the Roman Empire! I'm sure in comparison, people are gonna be real impressed by a raggedy puppet in a fucking garbage can, right?

And the Nurglon thing? Folksy, family values - that's what the American electorate responds to! Plus, I have no idea how, but they lined up a major party affiliation! All I can say is wow. Good luck to you, being. I hear judge rimjob the blah* is even considering endorsing them, and who can blame him?

Worse than all that, it turns out the John McCain is actually a much bigger grouch than Oscar could ever hope to be.

Which brings us back to why Oscar isn't speaking to me. See, I was a little bit pissed off at him for not even acknowledging the lovely chopsticks set I got him for National Grouch Day last week, and so I may have accidentally referred to Oscar as "would not even be in the same grouch league as John McCain if there were an official league of grouches" on a conference call with members of the press and virtually all of our high-level donors.

Two weeks left before the election, and I think it's time to call it on the Oscar '08 campaign. Time of death: still in the womb.

Oh, and to all those of you who will say they saw this coming, please feel free to fuck yourself with something large, metallic, furry, and partially green. Like, say, a garbage can with a Muppet sticking out of one end. Fuck yourself with that.
Posted by Smokey Robinson (aka Matt) at 12:18 PM